We spoke recently to Prossy Kawala before the Women in Public Service Uganda Institute that starts at Entusi in Kabale this Friday! Kawala is one of the organisers and also will be speaking at WPSUganda about effective uses of media for social change in Uganda.

Mon pi Mon: What was the IREX Community Solutions Program like? How has it affected your work?

Prossy Kawala: The Community Solutions Program is a professional development program for the best and brightest community leaders working in Transparency and Accountability, Tolerance and Conflict resolution, Environmental Issues and Women and Gender Issues. It is a program of the Bureau of Education and Cultural Affairs of the U.S. Department of State, and implemented by IREX.

Being part of this program was a great opportunity for me to challenge my own determination towards the way I viewed issues of concern and development in my country. There were all these great people, both women and men creating impact in their communities through the most creative ways you would ever imagine. They were not complainants or gramblers! They were not lamenters! They were doers and change makers, struggling through all the hardest situations to transform their communities; to unearth innovation and offer platforms that would bring much needed change.

Despite working for different media outlets for a good number of years, my participation at IREX sparked my inner voice that told me I needed to get out of the comfort zone and spread out some more energy. I also felt indebted to the women movement and especially the young people who viewed life differently. By differently I mean, looking at challenges as though they were a responsibility for someone else to handle.

I have since co-founded Center for Media Literacy and Community Development, a nonprofit duly incorporated in Uganda to transform communities through appropriate media and community approaches. Currently, we are spearheading a Community Media for governance and development project that seeks to foster a diverse and thriving media landscape by strengthening citizen engagement, introducing community news reporting and ensuring that the community is accountable to themselves and other stakeholders.

PK: Journalists can take lead in gender equality by first understanding and appreciating the gender cause. As journalists we say we set the agenda! This can only be possible if we fully understand and believe in the agenda. We should understand that Gender is not about women only; it is about balance and equality for all sexes. There must therefore be deliberate efforts to encourage gender sensitive language in our coverage of issues; in our reports and programs.

This starts from the story pitch or program script right to the final product.

Many times (deliberately or unconsciously) the media or journalists have been unkind to the women, often misrepresenting our issues or even taking sides with women mostly portrayed negatively even where there is a shared blame. This negativity is the challenge that the media is yet to overcome in pursuit for fairness and balance especially regarding gender equality. 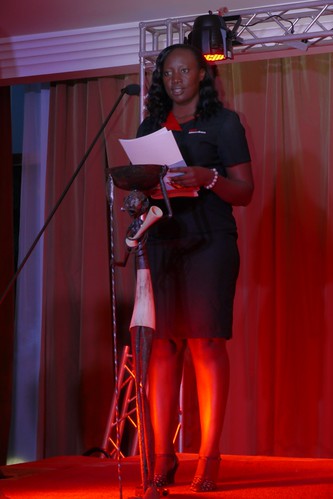 Gender is also about roles. We need to take lead right from our newsrooms and boardrooms (the media houses). To me I think affirmative action in job recruitment in the media should still be emphasized. In this way, we are not only looking at numbers but decision making positions. When we are doing this, we are in good position to drum up the debate with the rest of the population.

But also the aspect of training is very crucial in complementing a journalist’s efforts in taking lead in gender or any other issues. Most times the greatest mistakes we have made in drumming up campaigns is to think a journalist is “a know it all.” Do we have journalism and media schools mainstreaming Gender in their curriculum? If not, then we need to do much more in assisting journalists understand the issues for appropriate coverage and dissemination.

Mon: You have been very instrumental in pushing for platforms for women in Uganda- especially with TEDx. You curated TEDxNakaseroWomen and then now you are one of the forces behind WPS Uganda. Why? What is the impact you hope for?

PK: There is a lot of potential among the women in Uganda and worldwide. This potential if brought together and shared can spark conversation

and generate great ideas. This is the spirit in which I organize TEDx events in Uganda. I want to see women share their greatest achievements, their challenges, their fears but also dig into possible solutions to the world’s most challenging issues. Women are also doing so much but without much recognition. By organizing TEDxNakaseroWomen, I am creating a platform that recognizes women’s efforts in creating solutions to the world’s most pressing issues and encouraging other women to get up.

You must have seen the inspiration and energy exhibited by the women at our first TEDxNakaseroWomen event. Very rarely would you experience that as an individual. But as a group in a charged forum, you start to think broadly, you meditate, you open your mind to new challenges in life and then… you will be up on your feet thinking about the next project to impact change!

We have planned our next TEDxNakaseroWomen event for May 30th 2015 with a lineup of very powerful speakers to spark conversation. Every woman who cares about our country should look forward to this.
Similarly the Women in Public Service Project seeks to build a generation of women leaders who will invest in their communities, provide leadership and influence the way global solutions are forged. It was founded by US Secretary of State Hillary Clinton in 2011 in partnership with the Department of State and seven sister colleges.

The Uganda Chapter is being coordinated by Agnes Igoye, the training manager at the Directorate of Citizenship and Immigration Control in Uganda, who is an alumnus of WPSP Bryn Mawr institute. My first interaction with Agnes was a meeting to discuss her participation as a speaker at the TEDxNakaseroWomen in 2013, where she gave a moving TEDx talk about her journey through a conflict ravaged Northern region of Uganda to her determination to helping other women and children to get on their feet to reconstruction. Since then we kept the fire burning and when she approached me about joining her to organize the first WPS institute in Uganda, I said yes!

Mon: How effective is it to have a slot for women in media? Would it better to incorporate the women’s voices? Or an equal-but separate- platform?

PK: Because of historical disparities that affect the girl-child, we must deliberately diversify all platforms.

Having a slot for women in media can be very effective especially if a deeper analysis is taken to determine the need. For example, I come from a radio background and while I was on radio some two years ago, we ran (hour-long) programs where women participation was called for but surprisingly no women callers came through; the studio lines were ever jammed by male callers. So we decided to a lot one studio line to women callers only. When a male caller came through, he would be asked to pass the phone to a woman in his vicinity. As simple as it looked, the radio played a big role in building confidence among the women audience and promoting equal voices. Right now, there are fairly equal numbers of women and male callers.

The level of success may not be the same with other platforms though. There could be a risk of the other gender viewing the platform as “for women only”. I had a colleague who, whenever he bought the Saturday Monitor, pulled out the Full Woman Magazine and said: “here, I guess you are more interested in this.”
If there must be a separate platform, we should continually produce quality content- for either reader. I believe for women to make a mark, we must hang in there; ignite the fire from within. We must take charge of our space because for sure it exists but is being occupied as we look on. The men have borrowed our seats for a little too long and it’s time to have them back.

Mon: In your TEDxABQWomen, you spoke about the agricultural workforce having majority women but an analysis of the stories having only 7% women’s voices. The stories, you said, were also covered by male journalists.
Now with Carol Beyanga as ME for Daily Monitor, joining Aggie Konde and Barbara Kaija in top offices at media houses, do you think that this kind of reporting might change? Do you have hope? (If so, why? If not, why not?)

PK: Having a good balance of women in top offices can mean a more diverse team of leaders presenting different perspectives and greater abilities to contribute new ideas. Definitely Beyanga’s elevation to ME for Daily Monitor presents a lot of hope for a gender sensitive media product. According to Beyanga’s profile, she is fair and approaches issues with fairness and equality, but is also an effective manager and direct communicator.

It is exciting that finally, top media houses are confronting the gender gap and making efforts to retain and promote female talent. At the Uganda Radio Network, we recently got Barbara Among as Chief Editor too.

Nevertheless, how these ladies handle their teams will be a big contributing factor to creating the change we look forward to. As top managers, they are the vision bearers and therefore have a task to strategize on how best this vision is interpreted and understood. It is then that the team works towards a common goal.

I also want to believe that Beyanga, Among, Konde and the rest of the women in top positions deserve a lot of support from the rest of the women’s movement. We need to demonstrate that we appreciate them and their achievements in entirety and not apportion unfair criticism. Mentoring does not stop once someone hits the top position, no! “Women mentoring women” must be a continuous process at all levels of leadership development. In fact we have extended an invitation to Carol Beyanga to participate in the Women in Public Service Project – Uganda, where we shall have meaningful interactions with a number of equally powerful women around the globe.

This interview was conducted over email.