I had a delightful exchange with Jennifer Nansubuga Makumbi who won Kwani? manuscript project- the novel, Kintu, will be launched at The Writivism Festival 2014 in Kampala, Uganda. On May 14th, she was announced as the Regional Winner for Africa in the 2014 Commonwealth Short Story Prize competition, for her story Let’s Tell This Story Properly– a wonderful title.

We spoke about a lot of things from Yvonne Vera (read about her connection to Vera from Sooo Many Stories), to the Kintu launch in Kampala this month to Toni Morrison (the first time she bought Morrison, it was The Bluest Eye and she read it from evening to sunrise the next morning) and the novel she is working on now. This is some of what we spoke about:

On using oral tradition in writing…

I think in my case, after studying the way the novel works, (I did a module on Oral Traditions for my first degree,) I married performance with writing. I tell stories as if I am performing. I imagine that people are listening. But I am aware that the novel does not have the tone of voice, the sigh, the gestures and all those things that a breath of speech gives a performance so I work harder on the paper. I have been able to make oral traditions pliant in my novel(s) because I am using them majorly at an interpretive and metaphorical level.

What is important is that your parents gave you such wealth of heritage, what you do with it is critical – ‘how’ is a matter of style and choice.

Are you working on another novel? I read somewhere that you were, and now I can’t find where I found the information. The title was The Hamites. What is it about?

Yes, I am working currently on a novel called Nnambi. I suspect that the title might change because while it plays with Nnambi the mythical figure, this is not her story and it is not in dialogue with the first novel but due to the oral traditions (as the first man and woman) there is a kind of conversation between the novels. The new novel is set between 1965 and 1983 without dealing with the history of the time. It is a feminist novel with capital F! I am worried about the apology of anything feminist in the West lest it spills into African writing too. The Hamites was the earliest title of Kintu.

How do you balance your roles as a mother, homemaker, PhD student and writer? Do you use schedules, do you take time off (like a retreat)… how do you juggle everything?

Oh My God being a mother and writing! I was a single mother for most of the time. I have been very selfish and was always wracked with guilt as I went to work and spent money on my education (you know how astronomical international students’ fees are) and yet I was not coming out of the university to get a specific job. My son had to do without a lot of things that children here have. He learnt to say to other children that we are poor. Remembering it now brings tears to my eyes because he would say, “all my class is in France,” and I would ask why he did not go and he would say, “I did not want to ask you because I know you do not have the money.” He was just ten years old!

The thing is, Rebecca, I grew up in Uganda where you just deal with what is on your plate. I worked until my health gave away and I write everywhere any time; there are no schedules. No, I do not take time off. My idea of time off is when I go to cinema to watch a movie or when I pick a novel to read. Never been to a retreat; don’t know what it is like. Now that I have finished studying and work just a handful of hours a week, I have the time but still no schedule. I guess I am set in my disorganised ways. I only got married four years ago and life started to improve then.

A lot of African writers, Ugandan ones especially, are attached to an organization/group. Are you an African Writers Trust one?

No I am not attached to any organisation. I left Uganda before attaching myself to one. I wrote under the radar. In fact, when I won the Kwani? Prize, people were apparently asking, “Who is she?” because everyone knows everyone within the Ugandan literary circles but no one knew about me except Goretti Kyomuhendo. However I hope to integrate, especially within the Ugandan women’s writing circles.

Do you write with intention of subverting tradition? Or is it just that the natural state of oral tradition is to change with the times so it is easy to interrogate customs within themselves?

With oral traditions, the themes I am working on dictate how I handle orality in the novel. In Kintu, the Ganda idea that Nnambi is the sister of death and therefore responsible for it (not deferent to biblical Eve) that feminine guilt, subverted so that the blame lies squarely with Kintu. And you will find that oral traditions are masculinist. For example the oral history of Buganda suppressed the action of women like Nnabulya and Nnassolo, in the novel I magnify these women for people to know that the kingdom was shaped by both men and women. But in other cases like the Wakayima stories which put emphasis on brain and ridicule the brawn of the ferocious animal like the lion and the leopard, those I use differently. The fact that oral forms are transient is just useful, you get them from the present and bring them into the present easily. And yes, customs are not safe in my writing. Customs should be constantly interrogated; those that fail to change with time must be discarded.

It is the absence of women in oral traditions that drives me crazy. But then Ganda women always found a way of going around this repression in the sneakiest ways! This is as shocking as it is exciting. Their ability to make men feel like they are in control even as they run the show behind the curtain is something we Ganda women suckle on the breast. For example, when I was growing up it was a well-known fact that when a Ganda woman marries she does not put all her cards on the marital table. So you work but keep something for yourself, like get your own plot and build your own house and when that rainy day comes, for it was bound to come, you would have somewhere to go. That stopped when the inheritance and ownership of the family property law changed. I am telling you, Rebecca, as a bride, your aunt would take you to the side and whisper, “put something aside for yourself, child. This world is unkind,” while in public she insists that you should share everything you possess with your husband. Both my first and second novels explore women strengths.

When you won Kwani? manuscript, the novel was “The Kintu Saga”… how and why was the title then changed to Kintu?

I got rid of the word “saga” because it is an exceedingly European term for family stories that chronicle generations. This was soon after I submitted it to Kwani?. Indeed a lot of European friends said that while the novel is a saga, the word did not fit. Ironically, the title Kintu speaks directly to Ugandans in away that the earlier title did not and I am happy about that.

Also, I noticed you always write “Ganda” where I would have added prefixes. How does the absence/presence of the prefix Mu-/Ba- work?

Actually the tribe is Ganda, Gishu, Nyoro, Soga but we add the prefixes Ba for plural, Mu, for singular, Lu for language, ki for cultural or fatness, ka for thinness and so forth. For example, I have had problems with the word munnarwanda, because my editors knew of munyarwanda but I had to explain that in true Luganda, we would say munnauganda, munnakenya, munnarwanda and that is what my grandfather would say it. But Rwandese call themselves Munyarwanda, us Munyauganda and now we use, and rightly so, what the Rwandese call themselves. However because this story is told from a Ganda point of view, especially before this change was widely used in Uganda, it has to be munnarwanda. By the way Tutsis are big in this story, be warned! I am so glad you have asked this question. 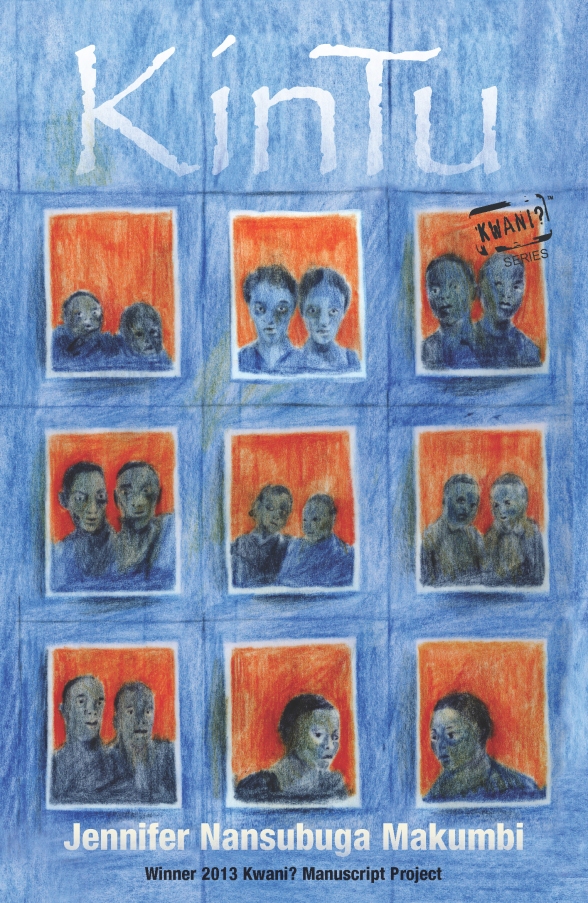 Are you excited about the launch? I imagine it was important for you to launch it in Uganda, and that is your most important audience.

Oh yes I am excited and anxious. I am happy because finally I get to launch my novel, but at the same time it is a very ambitious, unpretentious novel that deals with some painful subjects and not in the expected conventional way. It also asks some uncomfortable questions and it is very critical of some aspects of our culture. It is the first time that I am going to say to Ugandans that you look at things this way but I am saying that there are other ways of looking at them and it is not a taboo; try and see it my way. That is a very brave statement for me.

Jennifer Makumbi’s novel, Kintu, will be launched by Kwani? at The Writivism Festival on Wednesday 18th June, 6-8p.m. And she will be available to sign copies- alongside Zimbabwe’s NoViolet Bulawayo, Ghana’s Nii Ayikwei Parkes, and SouthAfrica’s Zukiswa Wanner, at Aristoc (Garden City branch) on 21st June.

5 thoughts on “Jennifer Makumbi’s next novel is “feminist with a capital F!””